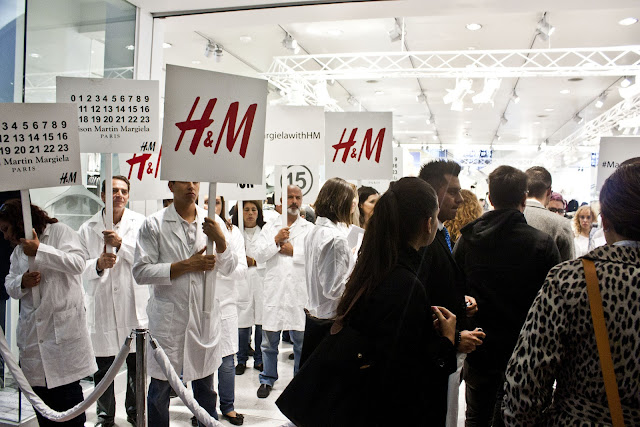 Just got home from Mercedes-Benz Fashion Week Mexico day 3 and oh does it feel good to cuddle up in my bed and write some posts; but anyway, as promised here is what happened last night after day 2 of MBFWM at the Maison Martin Margiela by H&M preview party.

So after my friends and I left the tents of fashion week, we headed over to the H&M store which was were the party was being held at. When we arrived there was a huge line of people waiting to go in, but despite the mob, we went in pretty quickly. There were waiters all over the place that greeted us with champagne glasses and others roaming around with mini gourmet bites such as one that had lobster on top of a jicama slice and my personal favorite which was a crouton square with goat cheese on top. I think I ended up having over 15 bites and that’s me being modest, and well.. as far as the glasses of champagne that I had.. well.. just scroll down to my last picture and you will get some sort of an idea. After we entered the store and headed over to the MMM section, people were literally fighting each other for the pieces. I was only able to try on a leather jacket that I really liked but unfortunately it was way out of my college student price range. The mob of people fighting over the Margiela pieces got very tiring so I decided to go roam around somewhere else with my friends and have some more champagne. I ran into other friends and a fellow blogger Eduardo Romo from Style Dude which was pretty cool. You may notice that I didn’t really take pictures of the actual pieces themselves, but hey bare with me, it was a little hard to do so considering the chaos that was going on in the store, besides I’m sure we have all seen the collection already. Finally after countless glasses of champagne, I ended up buying [even though I said to my self I wasn’t going to buy anything]some basic black t shirts that I saw around the store and really liked. No Margiela for me, oh well. 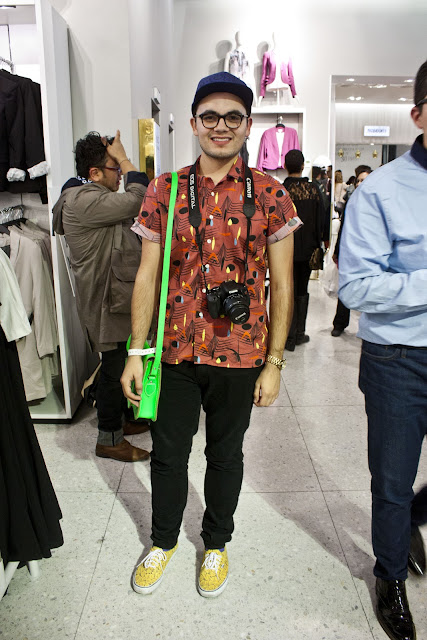